This Tuesday, the jury assigned to the murder trial of Derek Chauvin in the death of George Floyd declared that the former Minneapolis police officer was guilty of murder on all three counts he faced: second-degree unintentional murder, third-degree murder, and second-degree manslaughter.

As it was to be expected, woke Hollywood celebrities decided to take their opinions to social media — fervently supporting the jury’s decision to convict Chauvin to the point of actually celebrating the verdict. Shout outs to Breitbart for pointing us in the right direction.

X-Men: Apocalypse actor Olivia Munn also had something to add, sharing on Twitter “A guilty verdict. Rest in love George Floyd. Sending love to his family and friends,” while also posting a picture of Floyd to virtue signal even harder. 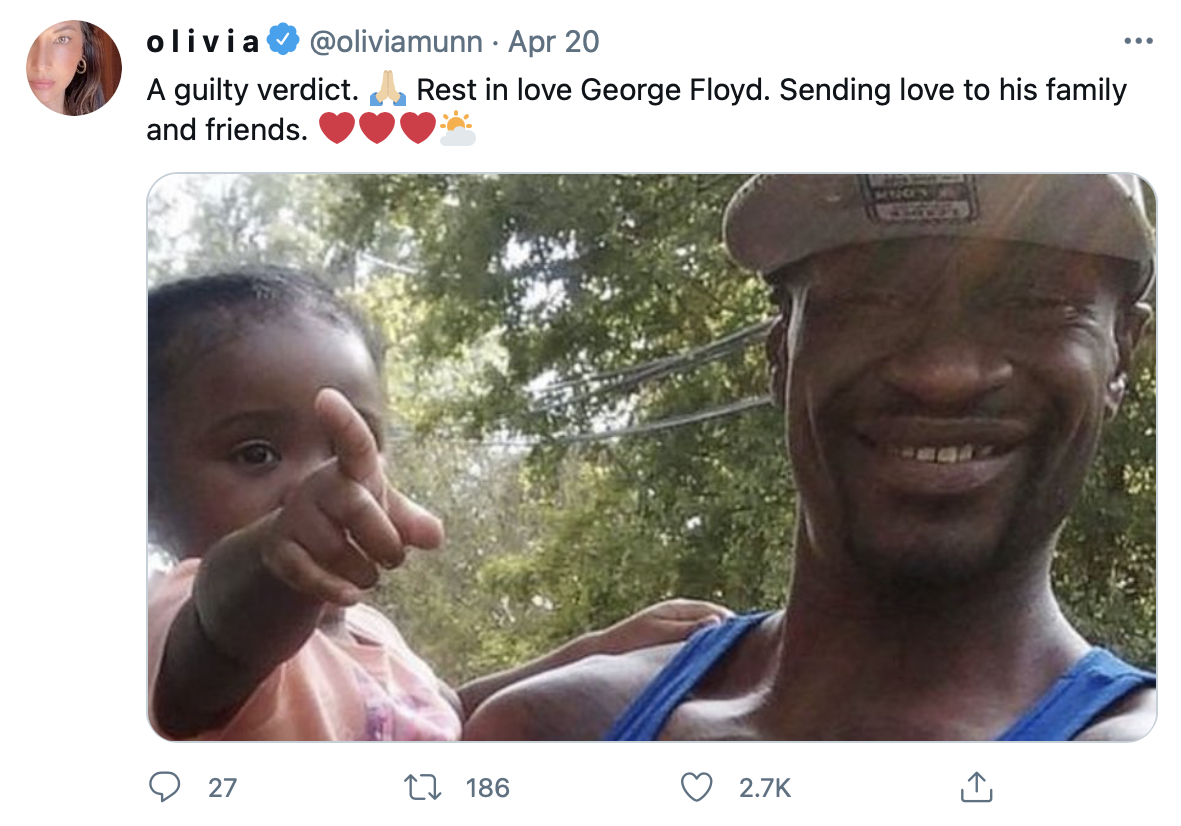 Viola Davis, who plays Amanda Waller in both of DC’s Suicide Squad film, also chose to share an image of George Floyd, accompanied with a tweet that read “GUILTY!!!! As it should be!! Now…Rest In Peace George Floyd. Rest. You and your family have been vindicated,” while also adding the #SayHisName hashtag. 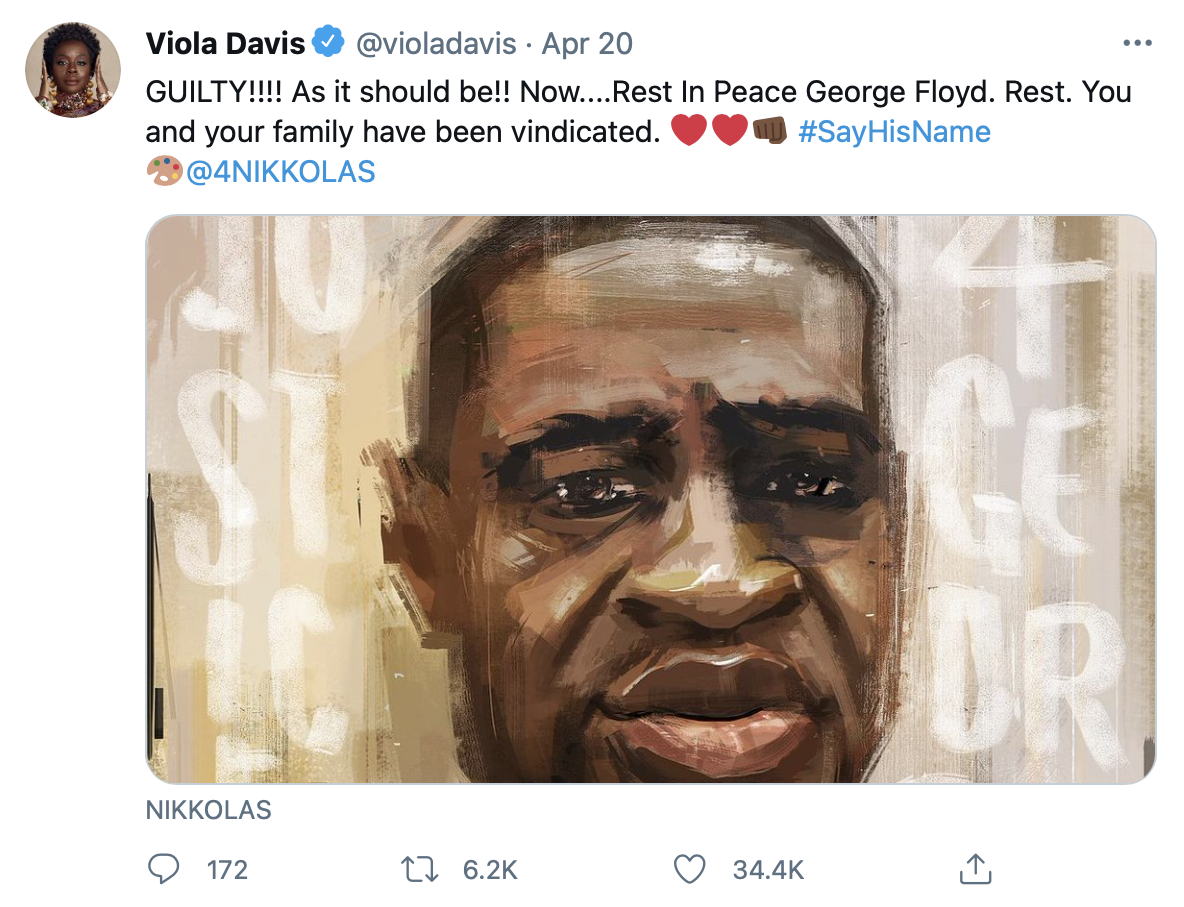 Elizabeth Banks, who played the character of Betty Brant in Sami Raimi’s Spider-Man trilogy and directed the recently failed Charlie’s Angels reboot, said “Thank you to the jurors,” while also adding the #ChauvinIsGuilty hashtag.

“We’re tired of being tired,” read the message that Academy Award winner Halle Berry, who has also starred in a certain superhero movie that nobody seems to remember, shared on Twitter. 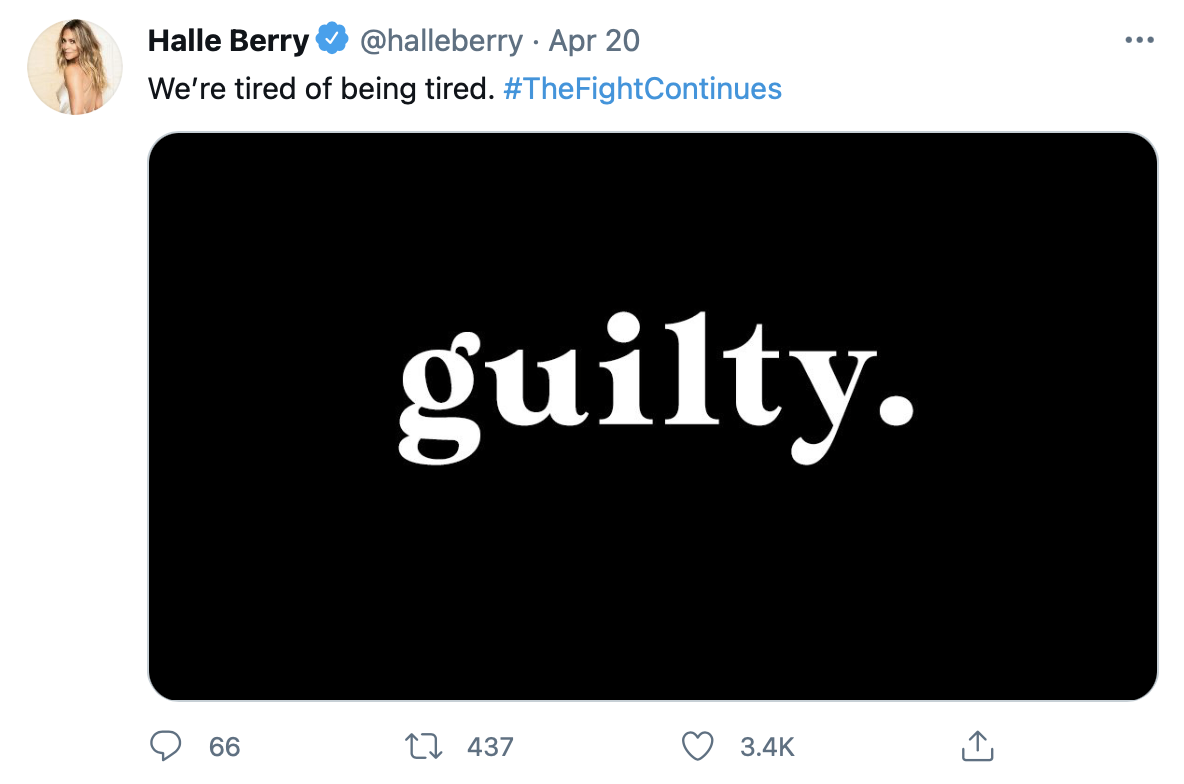 Today is a day we will all remember. Prayers for George Floyd and his family,” read a tweet by Daniel Dae Kim.

Kim’s tweet is actually a reply to Berenice King, Chief Executive Officer of Martin Luther King Jr. Centre,  who wrote “Oh, that George Floyd were still alive. But I’m thankful for accountability. The work continues. Justice is a continuum. And America must bend with the moral arc of the universe, which bends toward justice.” 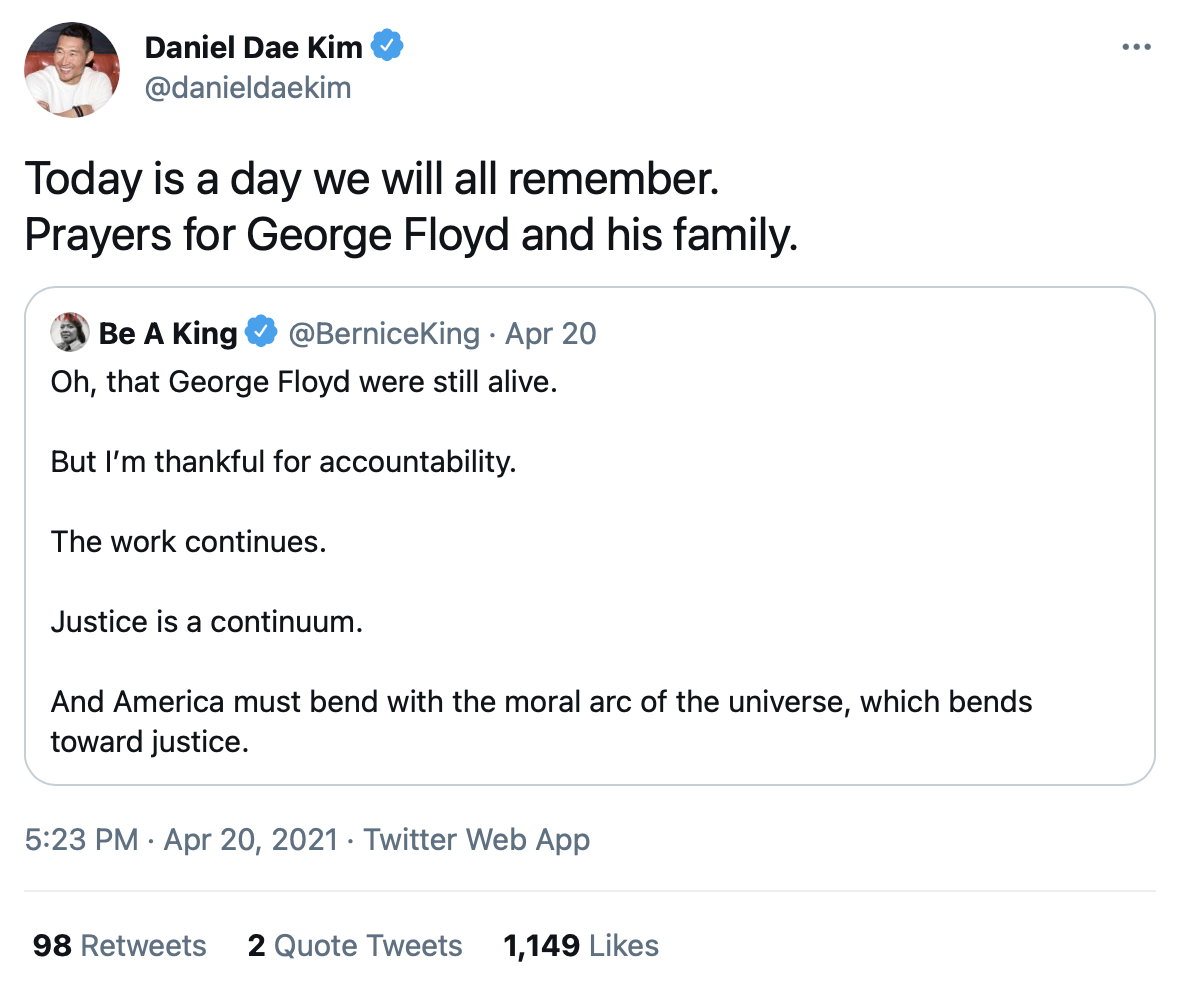 Here we have a classy tweet by 12-time Oscar nominated songwriter Diane Warren, who said, “Bye b—h have fun in prison!!” after the Chauvin trial was over.

Former NSYNC member Justin Timberlake actually had quite a few things to say, so he wasted no time sharing his woke views on Twitter for his over 64 million followers to read.

“This verdict is just the first step in a long line of injustice against the Black community, often with no consequences” the musician said.

He then adds, “The work is not nearly done. While there are many families waiting for justice, my heart is with George Floyd’s family right now,” taking things one step farther by also suggesting that the police should be reformed by including the #PoliceReformNOW hashtag. 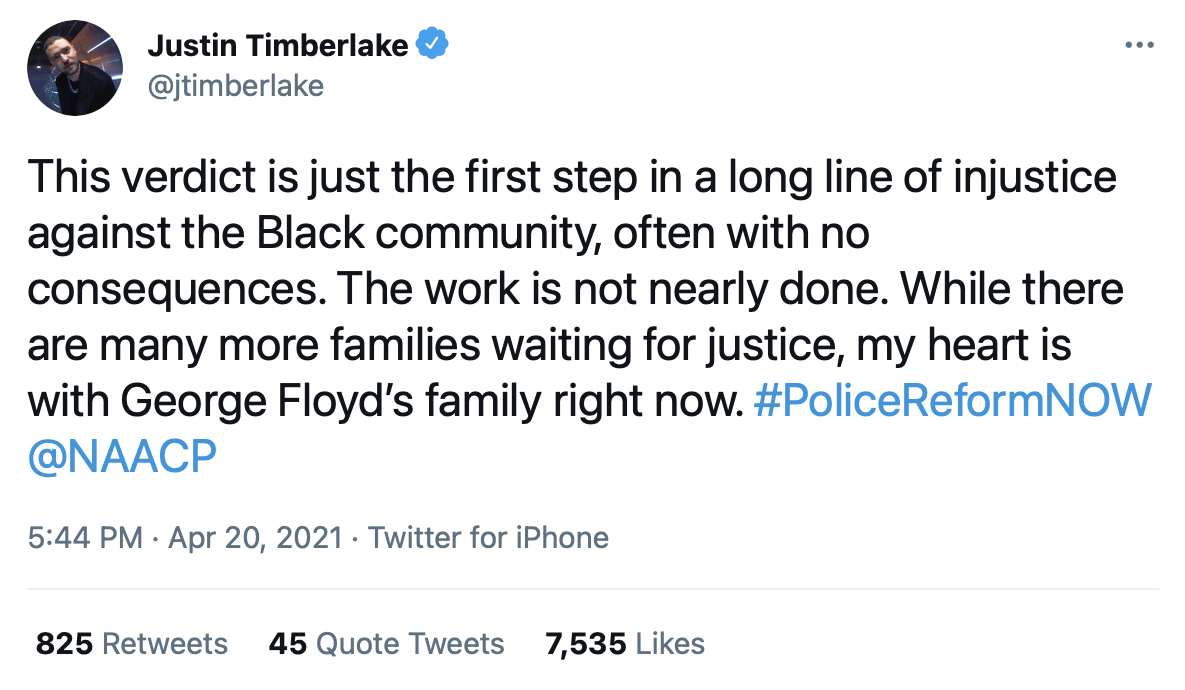 “Maybe 4/20 can now be the day we celebrate America standing up and saying no to police brutality, affirming that you will go to jail when you murder innocent people no matter what uniform you wear,” read a tweet by comedian Chelsea Handler.

Leftist activist and former actor Alyssa Milano’s pushed the woke agenda even further, tweeting, “FOUND GUILTY ON ALL THREE CHARGES. Rest In Peace, George Floyd. You have changed the world.”

“Justice is a step forward on the difficult road of healing,” read a tweet by The Hangover actor Ed Helms, who also added “Sending love to the Floyd family and the great city of Minneapolis.”

Renowned rapper Ice Cube sent a rather ominous warning, tweeting, “The jury did the right thing but will the judge do the right thing? Be careful family…the Empire always strikes back.”

Right after the jury reached a verdict in the Derek Chauvin trial, Pixels and Frozen actor Josh Gad tweeted, “Thank God,” implying that he was expecting that the jury would convict the former police officer.

Finally, we have Spawn and Ice Age series actor John Leguizamo tweeting the word “Justice!!” to all of his 400k followers. 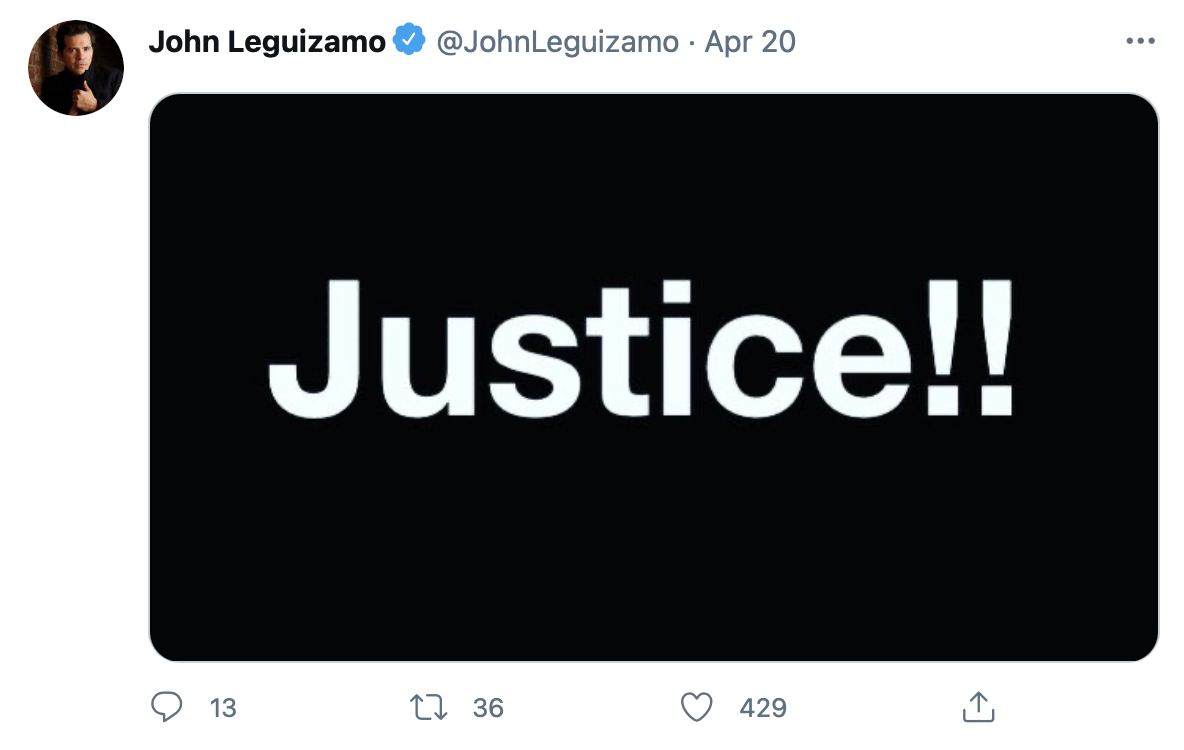 What do you make of these woke celebrities having a field day after the conviction of former Minneapolis police officer Derek Chauvin? Let us know in the comments section down below or on social media.