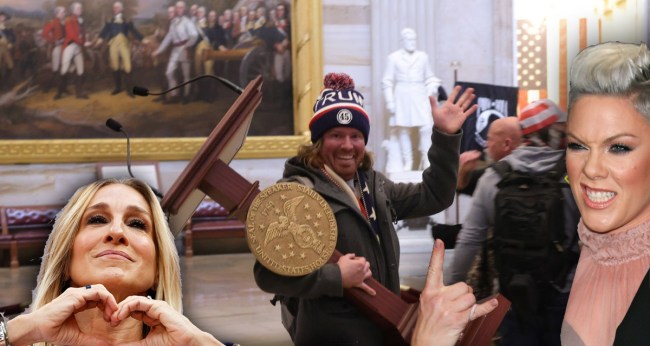 As we all know, regardless of what happens in the world, it’s not officially an important issue until some celebrities weigh in with their thoughts (and prayers).

As we’ve seen many times over the years, topics like the coronavirus pandemic, politics, voting, and whatever the hell this is, celebrities, they care.

So, while we all have feelings about what went down at the United States Capitol on Wednesday, as do many of the Senators and Congressmen in D.C., what really matters in trying times such as this is what celebrities think.

The folks over at E! News certainly understand this fact of life and so, while Americans were feeling scared, angry, and confused by the actions of Trump supporters in D.C. on Wednesday, they put together a nice little slideshow featuring photos of the chaos that took place overlayed with quotes expressing what some of the most important people in America, like Pink, Demi Lovato, Chris Evans, Abby Phillip, Sarah Jessica Parker, Chloe Moretz, and Jane Lynch, you know, all the heavy hitters in Hollywood, were thinking.

Of course, some very ungrateful people on social media didn’t appreciate the effort that went into compiling these slides by E! News.

That’s not even a joke.

every time some traumatic sh*t happens, they wanna ask random celebrities like we give a fck

I want to know how they decided what photo would go with which celeb quotation.

See? That’s the kind of important criticial thinking performed by E! News we should all be applauding.

Aside from Pink’s quote, this could be reviews of CATS

I’m sorry I will not be satisfied until I know what Christina Aguilera thinks.

Cool I was definitely like, “what’s Chloe Grace Moretz’s take on this” as democracy was crumbling around me