Sinead O’Connor opened up about being “cancelled” at the height of her career decades before the phrase became a popular way of publicly ousting someone from their profession.

In a promotional tour for her new memoir “Rememberings,” the acclaimed singer/songwriter, 54, was asked if she felt like the first celebrity “cancelled” after she ripped up a picture of the Pope during her performance on “Saturday Night Live” in 1992.

“That’s a good question,” she told Carson Daly on “Today.” “I was probably the first one that everybody was like, ‘Okay, that b—- is not having a career now.'” 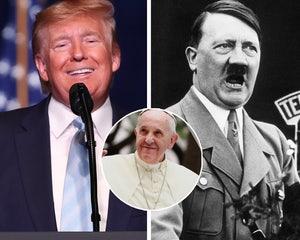 Did The Pope Just Compare Trump to Hitler?

Immediately following the incident, the backlash was fierce. O’Connor was banned for life from NBC. The Anti-Defamation League condemned her and conservative groups boycotted her music.

“I mean, they were steamrolling your records within 24 hours — literally with bulldozers,” Daly explained.

A week later on “SNL,” host Joe Pesci said he would smack her. And the Irish-born star would be booed off stage at a Bob Dylan tribute concert a week after that.

In her memoir, she recalled being celebrated by the audience and staff at “SNL” after performing her first song. But everything changed when she ended her second outing by tearing up the image of the Pope.

“Total stunned silence in the audience. And when I walk backstage, literally not a human being is in sight. All doors have closed. Everyone has vanished. Including my own manager, who locks himself in his room for three days and unplugs his phone.”

Music critic Jessica Hopper told NPR in a new interview, “She was the first celebrity in mainstream culture to be cancelled.” 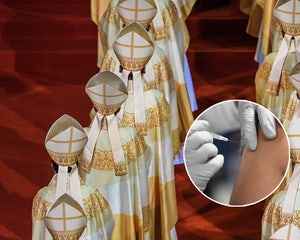 US Bishops Advise Catholics Against Getting Johnson & Johnson Covid Vaccine

O’Connor said she had been planning to destroy the photo as a protest against the Catholic Church for covering up child abuse. It was also to protest the abuse she claims she suffered from her late mother, as the photo belonged to her.

“That picture I took off my mother’s bedroom walls,” she explained to Daly. “It was a way of ripping her up as well, I guess.”

However, she doesn’t have any regrets about it.

“It was a blessing because I had to make my living doing the thing I love doing, which is making music,” O’Connor told Daly.

She went even further in her memoir, saying she never looked at the incident as derailing her career.

“That’s not how I feel about it. I feel that having a number-one record derailed my career and my tearing the photo put me back on the right track,” she wrote. “After ‘SNL’ I could just be me. Do what I love. Be imperfect. Be mad, even. Anything. I don’t define success as having a good name or being wealthy.”