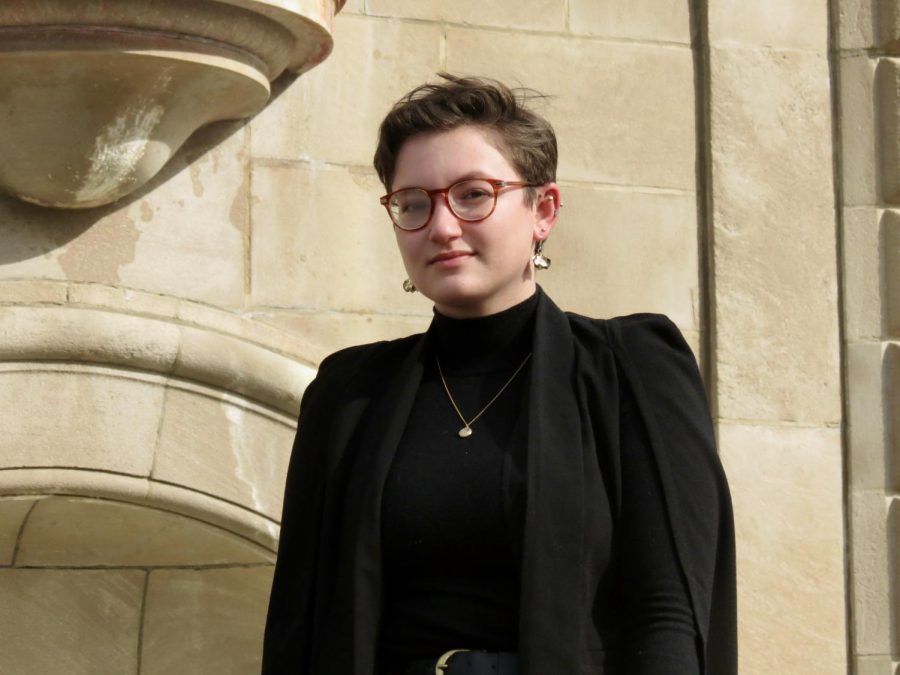 Hannah Lempert, sophomore urban studies major and public relations coordinator for the University of Thriftsburgh thrift store, created a TikTok acting out the possibility of a new online store for Thriftsburgh that went viral with almost 300,000 views.

With so many apps to pick from and so much content to then peruse, there are seemingly limitless choices for how to spend our time on our phones. But TikTok, the video social networking app, is the app of choice for millennials and Gen Z alike.

People spend hours on it, and Pitt students are no exception. In fact, many students have taken advantage of it and made themselves TikTok creators, with videos varying from college oriented-topics to viral dances.

TikTok accounts come in all shapes and sizes, each with their own audience for a specific kind of content. TikTok behemoths like Charli D’Amelio and Addison Rae post primarily dance videos and have amassed an upwards of 50 million followers. They operate similarly to other social media influencers on Instagram and Twitter, only their medium of choice is chiefly 60-second videos. There are sides of TikTok dedicated to anime and fandom content just as there are sides dedicated to makeup tutorials. TheaterTok even managed to make a bootleg musical based off the Disney-Pixar movie Ratatouille over quarantine.

Megan Franco, a sophomore psychology and theatre arts major, said she interacts with and often makes content with these more niche TikTok communties like TheatreTok, Gay TikTok and Comedy TikTok. She said these microcommunties can serve as refuges for individuals who don’t feel so welcomed by their family at home.

“Some of the communities on TikTok are very supportive and so I think people look for that comfort and support, even if it’s from complete strangers,” she said. “It’s support that they might not be getting in their real life.”

Franco started making TikToks consistently at the start of the COVID-19 pandemic, though she made a popular TikTok with 142,500 views in February 2020, which pokes fun at students’ expectations of Pitt compared to reality. She said once she got more attention on the app she had to get used to being in front of the camera.

“I’m not used to being on stage or in front of the camera so I had to work with that,” she said. “It’s going to feel weird being on camera, but I don’t need to worry about it too much because what I noticed is that people won’t [care].”

Most TikToks don’t go viral, but creators have built followings by catering their content to a specific brand or community. Hannah Lempert’s videos rake in viewers who are dedicated to the content.

Lempert, the public relations coordinator for the University of Thriftsburgh thrift store, said they started a TikTok account with the intent of getting people interested in and aware of thriting while sharing the benefits of shopping for second-hand clothing.

“I really want to emphasize to people all over that thrifting is not just some trend that we should be participating in,” Lempert, a sophomore urban studies major, said. “It’s a conscious act to stop fast fashion and consumerism of clothing we don’t need because there’s already so much clothing that exists in the world.”

Though Lempert’s intention was to raise awareness for the Thriftsburgh store, after a video on the account — in which Lempert acted out the possibility of a new online store for Thriftsburgh — went viral with almost 300,000 views, Lempert received dozens of comments from people all over the world. According to Lempert, it was a shock to receive requests from people in different countries on different continents, and they said it showed the wide reach creators can achieve on the app, even if they didn’t intend to.

“We’re getting a lot of questions on TikTok and Instagram from people who are like ‘Hey do you guys do shipping? I live in Saudi Arabia or Brazil,’” they said. “But it’s so weird we get people from all over wanting to thrift from us and they haven’t even seen any of our clothing.”

Lou Amar, a sophomore communications major, posted her most viral TikTok, with 2.3 million views and over 600,000 likes, just a few days before the 2020 presidential election. It featured a closeup of President Biden and Lady Gaga on their campaign trip to Pittsburgh on Nov. 3, 2020.

Amar said she made the decision to film the pair in the spur of the moment. When she saw the Secret Service cars on Forbes, she ran from Dunkin’ by Litchfield Towers to Schenley Plaza to get a picture. She said the subsequent TikTok was full of positive comments, but plenty of hate as well.

“If you post a video with Lady Gaga and Joe Biden in your face it’s probably going to blow up, but it’s crazy the rush you feel,” she said. “That social stimulation, all the comments. Even the hate comments, people who were screaming, ‘Trump 2020.’”

A political TikTok might draw good and bad attention from the app users, but Amar also said that when it comes to editing a video you have to make sure you put the right filters and settings over it if you want to get some attention.

“I don’t think my video would have blown up as much if I didn’t put popular music behind it or a sense of anticipation towards the beginning,” she said. “There needs to be kind of a hook, you can’t just put things out there that don’t seem interesting to watch. Add some pizzazz to it.”

But Lempert said for videos like theirs, where the goal is to be as informative and eye-catching as you can in a 60-second period, creators need to make sure to get their facts right.

“Definitely fact-check and make sure they’re correct if you’re using facts,” they said. “Also they don’t all have to be serious, they can be stupid or silly.”

But no matter what creators make — content catered to their universities, a trend blossoming in a TikTok micro community or Joe Biden in a stylish-looking trench coat accompanied by sexy music — Lempert said the point of making TikToks videos is to make people feel good.

“The things that you think are funny can also spread awareness,” they said, “because a lot of the way we spread awareness these days is through memes — lighthearted, funny videos that have a message.”