The joint letter was organized by the anti-Zionist Jewish Voice For Peace group.

It described the recent move as “an unprecedented and blanket attack on Palestinian human rights defenders,” warning that it “puts at risk not just the organizations themselves, but the entire Palestinian civil society and the tens of thousands of Palestinians they serve every day.”

In October, Israel designated six Palestinian civil society organizations as terrorist groups, saying they were tied to the Popular Front for the Liberation of Palestine, a secular, leftist political movement with an armed wing that has carried out deadly attacks against Israelis. Israel and Western countries consider the PFLP a terrorist organization.

But Israel has yet to take further action against the groups, which operate openly in the West Bank.

Thank you for speaking out and calling for action @MarkRuffalo. #StandWithThe6 https://t.co/blO6MYC69j

The six groups, some of which have close ties to rights groups in Israel and abroad, deny the allegations. 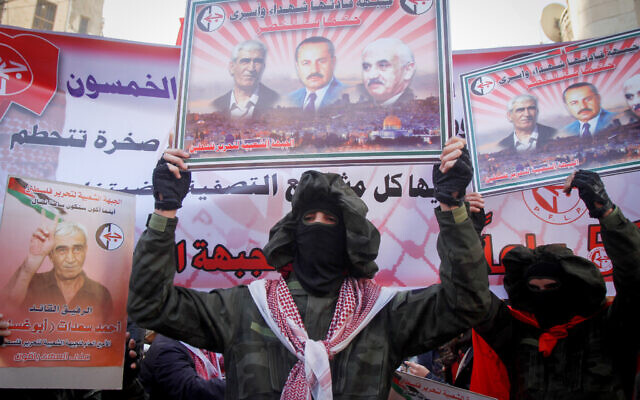 Palestinian PFLP supporters seen during a rally marking the 52nd anniversary of its founding, in the West Bank city of Nablus, on December 14, 2019. (Nasser Ishtayeh/Flash90)

Many, including Israeli ministers, have expressed skepticism about the allegations.

The Defense Ministry has yet to provide public concrete evidence of the allegations or of a direct connection between these organizations and the PFLP.

A confidential Israeli dossier shown to officials, detailing alleged links between the groups and the terror organization, contained little evidence and failed to convince European countries to stop funding the groups, according to a report earlier this month.

Agencies contributed to this report.