(RNS) — I recently read Katelyn Beaty’s excellent new book, “Celebrities for Jesus: How Personas, Platforms, and Profits Are Hurting the Church,” in which Beaty takes a close look at American evangelical pastors and how they get placed — or place themselves — on pedestals.

The book is full of stories about the predictable costs of fame and about the bad behavior that keeps on happening. Sexual scandals are invariably followed by “attack the victim” strategies as churches try to protect their wayward leaders. (We’re looking at you, Ravi Zacharias. And Bill Hybels. And Carl Lentz.) There are discussions of plagiarism and the embezzlement of church funds.

But Beaty also muses in important ways about religious power — why human beings are so anxious to put their souls in the hands of other flawed humans, and why those flawed humans feed on the adoration. 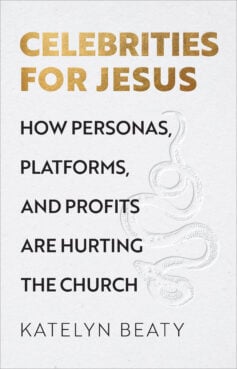 Katelyn Beaty’s “Celebrities for Jesus” takes a hard look at the dangers of celebrity culture in American Christianity. Courtesy image

Some parts of Beaty’s critique of evangelical celebrity culture are highly relevant to The Church of Jesus Christ of Latter-day Saints, and others, thankfully, are not.

Let’s start with the good news. In fact, let’s start with sex. There are certain benefits to the fact that the LDS church is an unapologetic gerontocracy. It’s not impossible that the members of our First Presidency may yet succumb to a sex scandal, but at ages 98, 90 and 89, it’s unlikely. (That’s not to say that local leaders are immune from this.)

Another benefit is that longevity, not personal charisma, determines who will hold certain positions of power. This is very different from the megachurches that have fallen like dominoes over one scandal after another. Those churches are likely to be founded by a charismatic pastor who determined the mission and hired the staff.

When a church is built around a pastor and its entire ministry is tied up in that one person, there are no real systems of accountability. The pastor surrounds himself with yes-persons who are there to protect the church — which is defined as the pastor. (And yes, it is almost always a “him” when we’re talking about megachurch pastors; Kate Bowler’s work has some fascinating windows into that world.)

That’s not the way the LDS church runs, or at least not since its earliest days. For Mormon leaders, he who lasts longest in the bureaucracy wins. Most men who serve in the Seventy never become apostles, and most apostles never become the prophet. Our current prophet didn’t assume that role until he was already in his 90s.

It’s safe to say that if someone is only in church leadership for the hope of eventual power, that’s a ridiculous amount of time to wait for it. The ultimate long con.

At the local level, too, there are various checks on the cult of charisma. You can’t get your patriarchal blessing from a patriarch outside of your stake boundaries just because that patriarch is rumored to give more spiritual or individualized blessings. (Unless the patriarch is a family member, like your grandfather.)

Mormons also don’t get to ward-shop, searching for the coolest bishop or the most robust Primary. Once you settle within a ward’s geographical boundaries, that’s where you’re going to attend even if it’s less than ideal.

Bishops have a lot of authority, but usually for five years; for stake presidents it’s more like 10. Then they return to other callings, ones people might be tempted to see as “lesser.” One of my favorite former bishops followed his time leading our ward with several years leading the Primary kids in song. And he was great at that too.

So, in many ways, the structure of the church provides a bulwark against celebrity culture. We’re already doing some of the things that Beaty suggests to detox from celebrity culture, such as emphasizing “the small, the quiet, the uncool, and the ordinary.”

There are also two aspects of Latter-day Saint culture that are uncomfortably similar to the unhealthy power dynamics and celebrity worship Beaty describes. The first of these, quite simply, is the idea that the prophet is the very mouthpiece of God.

I think there is a place for seeing the president of our church as the person God has called to be a special witness for Christ in our particular time. That doesn’t mean, however, that “the prophet can never lead the church astray,” as the adage goes. Special witnesses for Christ make mistakes too; Exhibits A through L of this principle would be Jesus’ chosen disciples in the New Testament.

Today we’ve gone overboard with our reverence for the church’s prophet and apostles. I like the magazine LDS Living and find many of its articles insightful, but I’m tired of the frequent “7 photographs of Elder So-and-So That Will Make You Love Him Even More”-type articles.

Loving the apostles more shouldn’t be our goal; loving God is the goal.

I’m also tired of the soaring self-referencing that happens now in General Conference. According to two researchers working independently (Christian Anderson and Quentin Spencer), mentions of Russell M. Nelson occur twice as often as for any previous president of the church. When speakers mention the current leader’s name as often as the Savior’s, it’s no longer clear just who it is we’re supposed to be worshipping.

One conversation we need to be having as Latter-day Saints is how we are to listen to the prophet as a spiritual leader, someone we love, while also always remembering that he is a human being.

The second way Latter-day Saints will recognize our church in the “danger zone” of celebrity culture is the lack of transparency about money and what the church does with its finances. There is zero accountability for how much money and property are given to the church, how much of it is spent and where it’s going, and what the long-term goals for it might be.

I wonder what it is we are so afraid of. It took the website MormonLeaks exposing an apostle’s 2000 pay stub for us to know what members of the Quorum of the Twelve might make as a base salary. And guess what? It was a perfectly reasonable high-five-figure amount at that time, on par with what a senior pastor, full professor or government manager might earn. In 2014, apparently, the brethren got a raise, but it was still in the range of $114,000 to $120,000 — far lower than many of these former businessmen, lawyers and doctors earned in their pre-church careers.

Knowing how well apostles are compensated didn’t erode my confidence in the church; it increased my faith in the institution. Boring. On the other hand, the 2019 bombshell that the church was hoarding more than $100 billion in an investment fund that had to that point only made distributions to help for-profit ventures was frankly devastating. It’s not a financial scandal, but it’s certainly a profound disappointment, because I expect my church to be doing good in the world with the resources it has been given.