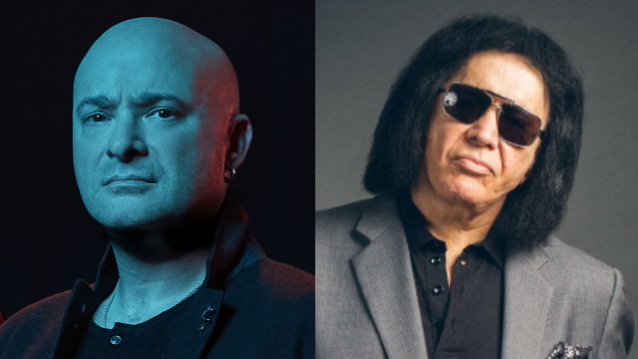 Gene Simmons (KISS) and David Draiman (DISTURBED) are among more than 125 leaders from the entertainment industry who have signed a joint statement released by the non-profit entertainment industry organization Creative Community For Peace, which calls on fellow entertainers and executives to use their platforms to combat misleading and one-sided accounts of the conflict in Israel and the Palestinian Territories. The open letter urges those in the entertainment community to use their voice to call for the de-escalation of violence and the end to divisive rhetoric while also acknowledging the pain and loss impacting all parties involved in the conflict.

The joint statement comes amid a wave of violence in Israel and the Palestinian Territories, including indiscriminate rocket attacks targeting metropolitan areas throughout Israel as well as Israel’s retaliatory response in Gaza.

“We are deeply concerned by the escalating violence in Israel and the Palestinian Territories,” the statement reads. “The loss of life and violence is heartbreaking. We call on the leaders of all parties to end the violence, urge calm, and work toward de-escalation.”

The statement’s signers are among the first in the entertainment industry to publicly promote peace while also opposing a surge of deceptive media narratives that have dominated the news cycle since tensions escalated nearly a week ago.

“We also call on our colleagues and friends in the entertainment community to stop posting misinformation and one-sided narratives that only work to inflame the conflict instead of bringing about peace,” the statement continues.

“Misinformed and fallacious memes being posted by those far away from the conflict are being taken for truth,” said Ari Ingel, director of Creative Community for Peace. “This distorted version of reality is being spread online and then amplified by influencers, which only fans the flames of hatred and has real life consequences.”

“We are deeply concerned by the escalating violence in Israel and the Palestinian Territories. The loss of life and violence is heartbreaking. We call on the leaders of all parties to end the violence, urge calm, and work toward de-escalation.

“We also call on our colleagues and friends in the entertainment community to stop posting misinformation and one-sided narratives that only work to inflame the conflict instead of bringing about peace.

“While we may have differing opinions on the conflict, it is never okay for Hamas to publicly call for the killing of civilians, use civilians as human shields, and rain down missiles indiscriminately on civilian populations with no care about who is killed—Arab or Jew.

“When lives are at stake, we all bear responsibility to unite rather than divide. Incendiary language only benefits those at the extremes who have no interest in peace. Our thoughts are with all Israelis and Palestinians who are experiencing unfathomable levels of fear and violence, and hope for the day when both peoples can live side by side in peace.”

Founded by entertainment industry executives, Creative Community for Peace (CCFP) is a non-profit organization comprised of prominent members of the entertainment industry who have come together to promote the arts as a means to peace, to counter antisemitism within the entertainment industry, and to galvanize support against the cultural boycott of Israel. CCFP is apolitical and does not stand for any government official or party. Instead, CCFP believes in artists and their ability to affect lives and effect positive change in the world.

To comment on a
BLABBERMOUTH.NET
story or review, you must be logged in to an active personal account on Facebook. Once you’re logged in, you will be able to comment. User comments or postings do not reflect the viewpoint of
BLABBERMOUTH.NET
and
BLABBERMOUTH.NET
does not endorse, or guarantee the accuracy of, any user comment. To report spam or any abusive, obscene, defamatory, racist, homophobic or threatening comments, or anything that may violate any applicable laws, use the “Report to Facebook” and “Mark as spam” links that appear next to the comments themselves. To do so, click the downward arrow on the top-right corner of the Facebook comment (the arrow is invisible until you roll over it) and select the appropriate action. You can also send an e-mail to blabbermouthinbox(@)gmail.com with pertinent details.
BLABBERMOUTH.NET
reserves the right to “hide” comments that may be considered offensive, illegal or inappropriate and to “ban” users that violate the site’s Terms Of Service. Hidden comments will still appear to the user and to the user’s Facebook friends. If a new comment is published from a “banned” user or contains a blacklisted word, this comment will automatically have limited visibility (the “banned” user’s comments will only be visible to the user and the user’s Facebook friends).


When Millie Bobby Brown Teamed Up With Dua Lipa, Orlando Bloom, and Other Celebrities for a Great Cause – Netflix Junkie


14 Celebrity Tattoos and What They Mean (If Anything) – Cracked.com


Celebrities Must Be Transparent About Plastic Surgery – Study Breaks