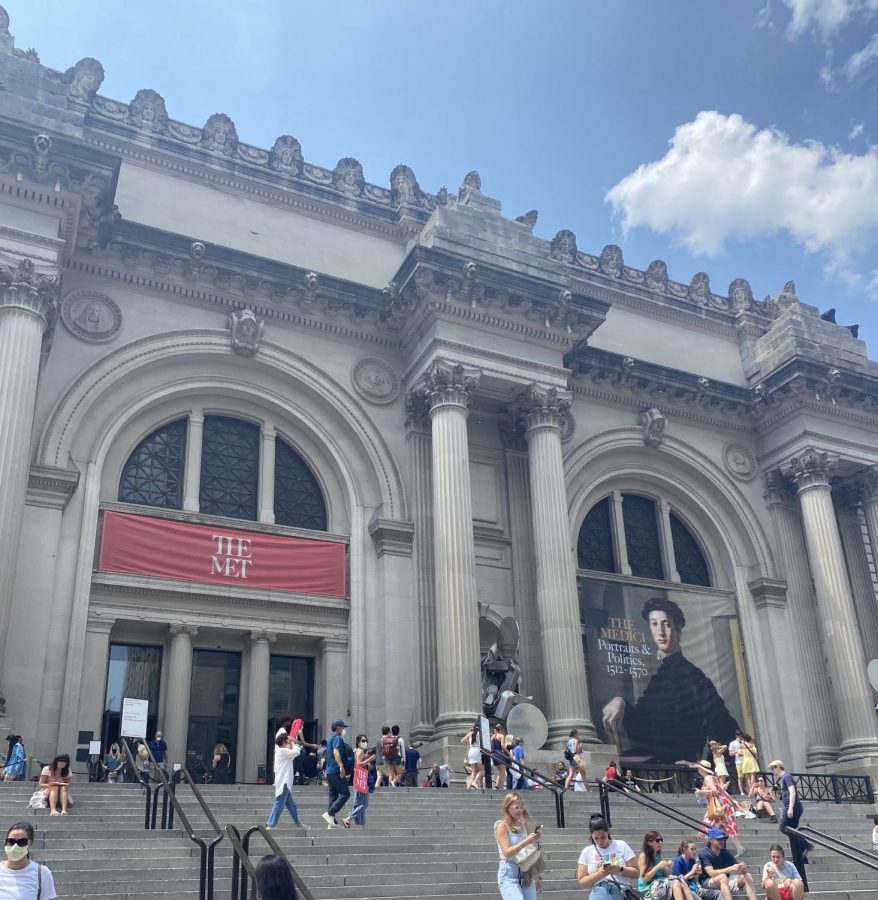 The annual Met Gala is held as a fundraiser Metropolitan Museum of Art’s Costume Institute in New York City.

Celebrities arrived at the Met Gala, referred to as “fashion’s biggest night out,” on Sept. 13 in their interpretations of the 2021 theme — “In America: A Lexicon of Fashion.”

The 2020 Met Gala was canceled because of the COVID-19 pandemic, and the 2021 gala was pushed to September to close up New York Fashion Week.

The gala’s exhibition — “In America: A Lexicon of Fashion,” — looks at the future of American fashion. Seventy percent of the exhibition focuses on young designers, and has been called a diverse, inclusive and sustainable exhibition by editor-in-chief of Vogue Anna Wintour in a red carpet interview with actress Keke Palmer.

For the first time ever, Vogue live streamed the red carpet on its website and Twitter account. Actresses Ilana Glazer and Keke Palmer hosted the live stream, which addressed viewer-submitted questions and interviews with the attendees about their outfits’ correlation to the theme.

The livestream was meant to be a step toward making high fashion more accessible to the public, but viewers were disappointed in the quality, especially compared to previous years of network red carpet streamings. Those watching Vogue’s live stream noticed frequent glitches, an interruption by a producer and a 15-minute delay in streaming.

However, viewers will take any information they can get on the gala, as the event itself is a secret to non-attendees. Red carpet photos, an occasional celebrity social media post or iconic bathroom photo, both of which are “illegal” according to Anna Wintour’s social media policy, are the only insight the public has inside of the Met Gala.

Looking back, here are some red carpet moments that stood out.

Delevingne wore white trousers and a white breastplate with “PEG THE PATRIARCHY” written in red lettering in the center.

Sex educator Luna Matatas coined and trademarked the phrase in 2015 in her apparel line Peg the Patriarchy with the goal of “getting provocative about subverting to the system of patriarchy.” “Patriarchy has no gender, working to dismantle it benefits us all,” she wrote on her website.

Delevingne did not interpret the phrase as Matatas intended, telling Palmer, “It’s about women empowerment. Women equality, gender equality, but it’s a bit like ‘stick it to the man.’” Matatas, who is a queer woman of color, independent artist and a small business owner, said it was dishearting to have her art shared by cis, white woman with power and influence without credit to her. Matatas contacted Delevingne and has not heard back.

Ocasio-Cortez wore a white, mermaid-style gown with an organza flounce. The back of the gown is embellished with bold, red lettering reading, “TAX THE RICH.”

AOC’s gown may be the most controversial of the night. The Congresswoman’s dress received criticism from all sides of politics, mainly criticizing her for wearing a phrase demanding something from the rich while attending an expensive event with the elite.

Designer Aurora James, who founded Brother Vellies, said in an interview with CNN after the gala, “When you finally get a seat at the table, you have to decide what the message is that you want to deliver.” For AOC, that seat was both figurative and literal, as she was one of the few guests to sit at Wintour’s table.

Eilish, who has worn oversized, streetwear clothing throughout her career, played into her feminine side, telling Palmer on the red-carpet that “it was time.”

Eilish worked with Oscar de la Renta to design this dress, pulling inspiration from Holiday Barbie as well as old Hollywood looks from Marilyn Monroe and Grace Kelly. Eilish spoke with Oscar de la Renta Creative Directors Fernando Garcia and Laura Kim to persuade them to go completely fur-free in order to work with them, urging all designers to do the same.

Makeup artist and beauty vlogger Nikkie de Jager, known as her YouTube handle NikkieTutorials, paid tribute to gay liberation activist and trans drag queen Marsha P. Johnson. The “P” in Johnson’s name stood for “Pay It No Mind,” which was written on a ribbon on de Jager’s dress. Johnson was known for collecting flowers dropped from sorting tables in Manhattan’s Flower District and using them to make flower crowns. De Jager also paid tribute to this in her outfit.

Osaka wore a colorful, bold printed silk dress with a black, ruffled, silk-leather cape. Her hair was in twisted braids on top of her head with spiked fans of hair jutting out from each side that were decorated with red gems.

To make up for the canceled 2020 Met Gala, a second part to the gala will take place on May 2, 2022. The second gala’s exhibition is titled, “In America: An Anthology of Fashion,” and will open May 2, with both exhibitions running until Sept. 5, 2022.