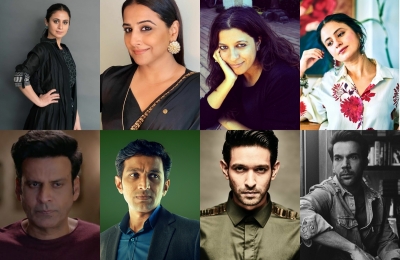 New Delhi– Celebrity culture has come a long way in Bollywood. From an era where filmy magazines were the only source for fans to get a glimpse of their favourite stars, to TV interviews to paparazzi culture to social media ecosystem of Instagram and Twitter, every new medium is bringing the fans closer to their celebrities. The latest technology bridging the gap between celebrities and fans is the audio room apps.

Though the concept is at its nascent stage, with Clubhouse taking the lead followed by the recently launched competitor Spotify Greenroom, Twitter spaces, Facebook live audio rooms and Fireside, it’s said to be the next wave of social communication.

Celebrity publicist Jashoda Madhavji, founder, Dream N Hustle Media, believes that the pandemic is one of the biggest factors for the shift in celebrity culture and social audio booming.

Jasodha told IANS: “Celebrity culture has witnessed a transformation since the onset of the pandemic. I feel the need to acknowledge the “real-time” as a theory has become the need of the hour and the definition of stardom has changed drastically.”

“The elitist culture is being done away with this new decade and celebrities need to showcase a sense of authenticity to leverage their fan base. Clubhouse has been able to spotlight the voices of regular individuals and create a world of relatable influencers which I think is a great way of moving away from the over-hyped celebrity culture,” she added.

According to her, there is a ‘Zoom video fatigue’ and these apps manage to create a niche. “We’re all a bit worn-out of looking at each other’s faces over the computer screens. Audio, on the other hand, is hot and podcasts have grown over the last few years. Clubhouse’s formula and timing are a great mix for these Covid times when we’re physically disconnected from one another but need that personalised human connection,” she said.

One of the pioneering creators at Clubhouse, Aniruddha Guha believes that audio room is only an extension of the already existing social media presence. He told IANS: “Unlike with other social media like, Twitter, IG and FB, where the content remains for an X number of hours or for eternity, the content created on Clubhouse is live, to be enjoyed in that very moment. I think there’s an inherent beauty to these conversations not getting recorded – the gratification is instant and more long-lasting in people’s memories.”

‘The Bollywood Film Club’ at Clubhouse is created by Aniruddha, the screenwriter of films like “Malang” and the upcoming “Rashmi Rocket”.

The club features two weekly programmes -‘Inside the writers’ room’, where he talks to the writers of his favourite series/films and does a deep dive into the scriptwriting process. “The idea of the show is to throw the spotlight on screenwriters, who are otherwise overlooked in the press. So far, the writing teams of ‘The Family Man’, ‘Scam 1992’, ‘Neerja’, ‘Kapoor & Sons’, ‘Raazi’ and ‘Death in the Gunj’ have been featured,” he said.

The other programme is “In the Club”, where Aniruddha and his wife Janice Sequeira co-host a talk show with a film personality whose work they admire. “So far, the programme has featured Zoya Akhtar, Vidya Balan, Vikrant Massey, Pratik Gandhi, Manoj Bajpayee, and Rasika Dugal.”

While Clubhouse audio chats are real-time, Spotify’s Greenroom is ahead of time and has introduced recording the audio chats in a certain way. Spotify spokesperson told IANS: “Greenroom is a platform for live audio conversations that we’ve built, keeping the creators and artists in mind. We’ve launched afresh on boarding experience, the ability to record a room by the host, chat moderation, and more.”

Talking about the celebrities on Greenroom, he said: “It’s still early days, but we recently hosted a Greenroom session with Rajkummar Rao and Ranveer Allahbadia to talk about audio as a format as well as our recently announced ‘Ruk Jaana Nahi’ initiative, narrated and hosted by the Bollywood actor.”

Since it’s a naive concept, presently there are only a couple of Bollywood personalities hooked on to these apps. There is an apprehension concerning the usage. Aniruddha said: “Sometimes, there’s a slight hesitation for film personalities who aren’t already on the app, which is why Janice and I take the guests through its features beforehand, get them comfortable on how to use it, and only then conduct the rooms.”

Sharing his experience of interacting with celebrities on the app, he said: “In my experience, I’ve realised that even the most reserved personalities eventually open up a lot more in our rooms than they would on, say, a video interview, due to the easy-going vibe of our rooms, and the fact that we don’t necessarily follow a strict question and answer format. Instead, it’s a more conversational approach – like among friends meeting over dinner.”

While digital technology has its own benefits, it too has a flipside to it. Jasodha’s concerns pertain to data infringement of the celebrities. She expressed: “There is a downside too. The very nature of clubs is that it brings together like-minded people, which can leverage polarisation. There are no moral police and those who disagree are met with online abuse.”

“The biggest dread, however, is that people can record the chats using a third-party app and leak them to cause harm, especially concerning celebrities and public figures. If you are not media trained, you need to be very careful before speaking on Clubhouse because it is like a live press conference,” she shared.

While it’s too early to see the potential benefits and detrimental aspects of audio room apps in India, however, the unscripted conversations in real-time are like a balming aid for human connection in these uncertain times. (IANS)