JEOPARDY! fans were seeing red after one of the famous contestants on the most recent Celebrity Jeopardy! wore dark sunglasses throughout the entire episode.

Fans online couldn’t look past Eddie, who is best known as the inspiration for the former hit show Fresh Off the Boat, as he chose to keep his circular shades on during the game.

One fan found it especially disrespectful.

“Take off your glasses!,” the person tweeted. “Have some respect for the Alex Trebek stage!”

Others were just baffled by how he was able to pull the look off, and still compete. 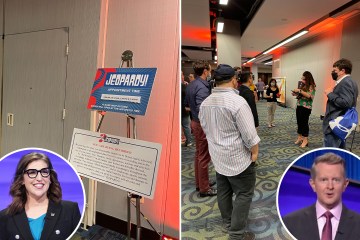 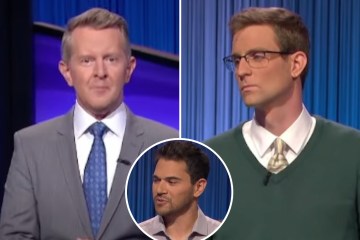 “My main question so far is how can Eddie see with sunglasses?” one fan asked. “I have a hard enough time with regular glasses.”

Another slammed: “I’ve never seen nobody wear sunglasses on Jeopardy! before.”

While one added snarkily: “One minor rules difference between Jeopardy! and Celebrity Jeopardy! is that the producers won’t let you wear sunglasses on normal Jeopardy!”

And some had issues with the show overall.

Most read in Entertainment

“I’m trying really hard to watch celebrity jeopardy!, but it’s painful,” one person tweeted. “This chick Lliza may be the dumbest person I’ve ever seen. This does not help ratings. I had to turn it off. Be better.”

In a wild finish, Simi claimed victory after trailing way behind frontrunner Andy for much of the game.

Andy answered questions as if he could manage alongside any of the scholars who regularly compete on Jeopardy!

But in the end, Simu answered the final question correctly and doubled his earnings, allowing him to win the game.

However fans watching from home weren’t impressed with its guests or its host.

As one person tweeted, “Looking forward to Celebrity Jeopardy! getting less cringe when the next round comes.”

Another critic wrote: “Only the first episode and Jeopardy! sure is scrapping the bottom of the barrel when it comes to ‘celebrities.'”

A third commenter agreed, stating “I’m really enjoying Celebrity Jeopardy! and no disrespect to the great Andy Richter but he shouldn’t ever be the biggest celebrity.”

They continued: “And he is. Kinda sad lineup for [the] first episode.”

Others were quick to weigh in on the format, particularly, the ease of questions being asked.

One fan on Twitter commented: “I don’t wanna say Celebrity Jeopardy! is ridiculously easy, but one clue was about a famous reindeer- which I’m pretty sure anyone over the age of three would get.”

Another commented: “Celebrity Jeopardy! is the worst; simple clues with celebrities we’ve never heard of who don’t know anything, except hamming for cameras. Add in more commercials to make it painful.”

“Okay Jeopardy! must think celebrities are not very smart because I knew a good 80-90% of the answers on tonight’s show & I’m seriously not that bright…” scathed another viewer.


10 Celebrities Who Have Made Bitcoin Predictions – Coinchapter


America’s Most Googled Celebrities Of The Year – Valuewalk