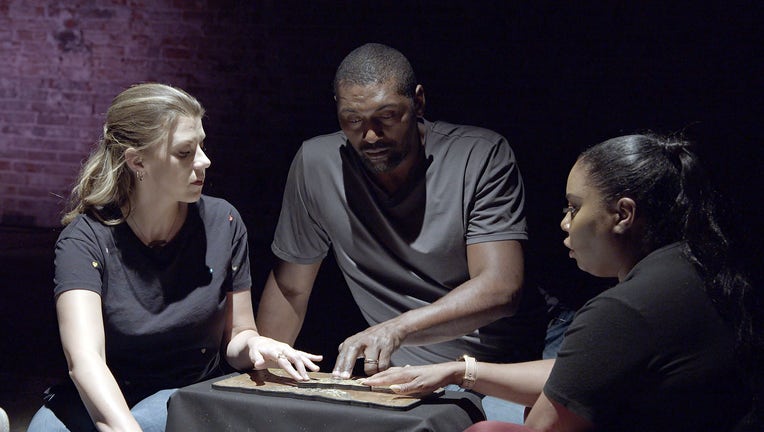 LOS ANGELES – Would you enroll in a paranormal boot camp? It’s the premise behind “Celebrity Exorcism” — a two-hour special where stars embark on a creepy adventure through haunted locations.

In the special, celebrities Shar Jackson, Jodie Sweetin and Metta World Peace are given no information, except for their initial meeting location.

“I was like all in,” Sweetin (“Full House,” “Fuller House”) told FOX Television Stations of going inside the haunted locations. “So yeah, I was definitely the enthusiast for sure.”

The unknown is soon revealed in the special when Rachel Stavis, a celebrity exorcist, introduces herself and lays out the journey ahead. Each team member comes to the table with their own level of beliefs and reservations.

“I was the wuss and I was the skeptic,” former NBA legend World Peace laughed.

RELATED: Terror on Tubi: ‘Rosemary’s Baby’ in Paris and New York, its cities of fright

Through visiting several haunted locations around Los Angeles, the team comes to terms with their own fears and finds the courage and openness to experience a world beyond our own.

“It was definitely some very scary stuff going on,” Jackson (“Moesha”) said.

“I did sense some being saying, ‘Why are you here? This is not a show, this is my home.’ It felt like at times they didn’t want us to be there,” World Peace, 41, shared.

Ultimately, the show takes viewers on a ghostly adventure, facing terrifying encounters with realness and some much-needed humor as they investigate the paranormal.

“There was one point in the house, where we were towards the end, that there was something there that did not like anyone being there for sure,” Sweetin, 39, said of her experience. “As brave as I am and as much as I like to push boundaries, I’m not gonna lie, I ran screaming up those stairs in a complete panic, which was both hilarious and terrifying.”

RELATED: Terror on Tubi: ‘I Spit on Your Grave’ and its Final Girl legacy

But despite their crazy experience, the team agreed the show formed a forever bond.

“I think they are going to see a great friendship and a great bond and a lot of fun in this,” Sweetin continued.

With total view time surpassing 200 million hours of content streamed each month since April, Tubi has over 30,000 movies and television shows from over 250 content partners, including every major studio. The service gives fans of films and television programs an easy way to discover new content that is available completely free.

Tubi is owned by the FOX Corporation.

About the writer: Stephanie Weaver is a Los Angeles-based journalist. She is a host of the national streaming show, LiveNOW from FOX, and is a digital reporter for FOX TV. Find her on Facebook and Instagram at @StephWeaverTV.

Candyman (1992): August saw the arrival of Nia DaCosta’s “Candyman,” a “spiritual sequel” to the 1992 original from director Bernard Rose. Seeing this film isn’t a prerequisite for enjoying its descendant, but the ties between DaCosta’s film and Rose’s are robust. “Candyman” hit number one at the box office (racking up $22.3 million in North America in its first weekend in theaters), but it will cost exactly zero dollars to see its predecessor, and your experience with both films will be greatly enriched.

The Guest (2014): A creepy Dan Stevens stars in this bloody 2014 thriller, in which a family welcomes “an army vet claiming to have served with their dead son” into their home, only to find they’ve opened the door for an absolute bloodbath.

The Descent (2006): “Directed by Neil Marshall (“Game of Thrones,” “Hellboy”), “The Descent” is often lauded as one of the best horror films of the last 20 years. It deserves that reputation.” Read the rest of Emma Fraser’s thoughts on this contemporary classic.