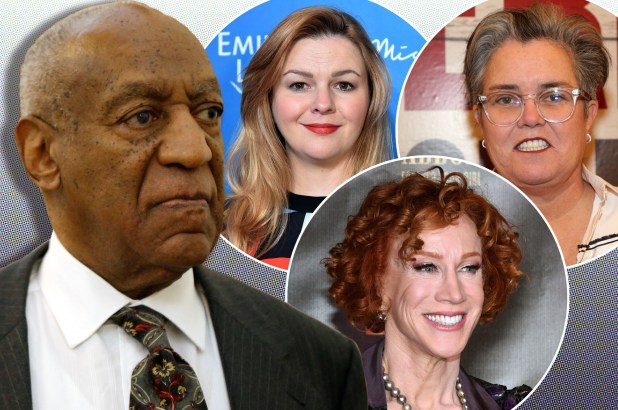 Celebrities are reacting to news of Bill Cosby’s release from prison.
Getty Images

On the heels of Bill Cosby’s sexual assault conviction being tossed on Wednesday, celebrities have taken to social media to express their outrage over the shocking turn of events.

With the exception of Phylicia Rashad, who was slammed on Twitter for praising the overturn, famous names including Amber Tamblyn, Gabrielle Union, Rosie O’Donnell and Debra Messing expressed their anger for the sudden reversal.

Cosby — who was two years into a three- to 10-year sentence for drugging and molesting Andrea Constand in 2004 — was allowed walk free after Pennsylvania’s state supreme court found a prosecutor’s decades-old agreement should have shielded him from criminal charges.

Actress Amber Tamblyn was “furious,” to hear the news, claiming she knows women who have been “drugged and raped while unconscious” by the comedian.

The “Sisterhood of the Traveling Pants” star, 38, added in a second tweet, “I don’t want to hear anything about how cancel culture ruined men’s lives during the MeToo era reckoning for women and survivors. How we went too far. Today’s news that Cosby’s conviction is being overturned is proof we haven’t gone far enough. Our justice system MUST change.”

“Whose Line Is It Anyway” host Aisha Tyler retweeted Tamblyn’s post with a frown face emoji, later adding, “All you rapist apologists can get TF out my timeline. Don’t worry, I’ll show you out.”

Actress Gabrielle Union was sure to include “#MeToo” while linking to a tweet from journalist Ernest Owens reading, “NOTE: Bill Cosby’s sentencing isn’t being overturned because he’s innocent — but because of a previous deal he struck where he already admitted to drugging women in a deposition.”

The political talking head and frequent “View” guest compared Cosby to Jeffrey Epstein in her reaction.

“He raped more than 60 women but I guess that doesnt matter?” she wrote. “Anyway, I’m still on my abolition journey. I was fine with him staying in prison for the remainder of his life. And yes, the prosecutors are responsible for this. They can have some of this smoke, too.”

“I know many young women and men who are so Afraid to press charges against their rapist and Re traumatize themselves I am heartbroken today to hear of the news of Cosby’s release .this is sickening. My heart is with my sister survivors. We have work to do.”

Comedian Kathy Griffin was also disheartened by the news, tweeting, “WHEN will things get better for women and girls regarding sexual assault, sexism, misogyny and ageism? What will it take? So discouraged.”

Director and actress Christine Lahti believes Cosby is a free man because of his “privilege” and “the patriarchy” as a whole.

“I’m enraged, heartbroken and disgusted by Cosby’s release,” she tweeted. “I can only imagine what all his survivors must be feeling. This convicted rapist is free today because he is a man of privilege. The Patriarchy rears it’s ugly head yet again.

Stand-up and comedy writer Kelly Bachman made it a point to mention Cosby along with disgraced comics Louis C.K. and Chris D’elia, whom she believes received nothing more than slaps on the wrist for their alleged misconduct, despite many believing “cancel culture has absolutely gone…too far.”

At the time of Cosby’s 2018 conviction, there were 62 known accusers.

The “Will & Grace” alum offered her empathy to Cosby’s accusers upon hearing of his release.

“To every woman who was sexual assaulted by #BillCosby my heart hurts for you today and I am full fury. It’s horrifying.”