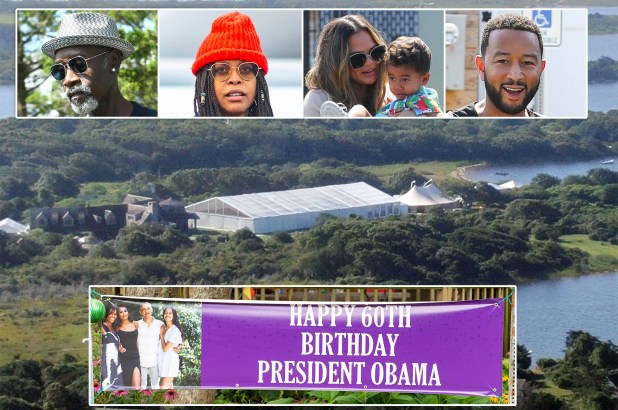 Stars descended on Martha’s Vineyard Friday ahead of former President Barack Obama’s 60th birthday party, after his spokeswoman claimed the Saturday bash would be scaled back to include “only family and close friends” amid COVID-19 concerns.

Celebrity couples such as John Legend and Chrissy Teigen and Dwayne Wade and Gabrielle Union were spotted arriving on the Massachusetts island in pictures obtained by The Post.

Teigen, who has recently come under fire for past bullying comments, was seen cradling the couple’s 3-year-old son Miles, as her singer hubby helped unload a white van.

Other mega-stars — including Jay-Z, Beyoncé, Stephen Colbert and Oprah Winfrey — were also on the island, according to pictures and a report in The Daily Mail. John Kerry, President Biden’s climate czar, was also in attendance, according to the report.

The party was initially set to feature 475 guests and 200 workers, but an Obama spokeswoman on Wednesday said the party would be rolled back after an outbreak of the Delta variant in nearby Cape Cod.

“Due to the new spread of the Delta variant over the past week, the President and Mrs. Obama have decided to significantly scale back the event to include only family and close friends,” Hannah Hankins said in a statement.

Obama’s decision followed a report by The Post, which cited a source as saying the former president was creating a public health “nightmare” by trying to get nearly 700 people to his party amid a national surge of the variant and new restrictions.

Among the bigwigs that didn’t make the final cut were David Axelrod, Larry David, David Letterman and Conan O’Brien, according to The New York Times.

The Roots drummer Questlove was set to perform and coordinate a vegetarian menu, according to Bloomberg, but a rumor that Pearl Jam was also set to rock the party was unsubstantiated, even as Eddie Vedder was set to attend, the Times said.

One local businessman joked to the Mail that the Democrat has a loose definition of “close friends.”

“His close friends apparently include his golfing buddies, politicians, celebrities. Those people are here on the island and I doubt he’ll be turning them all away,” the local reportedly said.

“He wants people to think this is going to be small and intimate, but I don’t think we have the same definition of intimate.”

Other locals told the outlet a scaled back party could hurt commerce on the resort island, as hotels across the Vineyard reportedly saw cancellations after the ex-president trimmed the guest list.

“I know a lot of people were counting on the income from all the people flooding in and they’re disappointed. But to be honest the place is still busy and there’s also a lot of people who won’t miss the traffic.”

The man of the hour was photographed playing golf at an exclusive local club, with a $350,000 initiation fee, a day after his Wednesday birthday, according to the report.

“Just make sure you get a good picture of me!,” Obama told a Daily Mail photog, as he wore a cap with the numbers 44 and 60 on it – references to his presidency and age.

Obama and his golfing companions then joined friends at a local bowling bistro and bar, the article said.

Earlier in the week, White House Press Secretary Jen Psaki defended Obama’s decision to go ahead with the party, noting that the Vineyard’s Dukes County only has a moderate rate of COVID-19 transmission.

Prominent Republicans shot back that Democrats would be up in arms if a GOP icon threw a similar bash.

“Just imagine if this party was for Trump,” Arizona Rep. Andy Biggs tweeted.